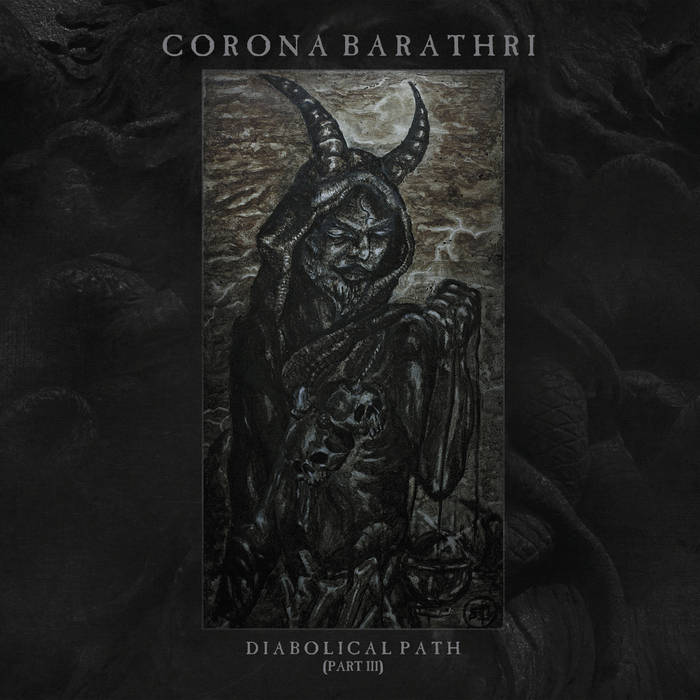 This compilation contains the most significant works recorded for the section of the Dark Path 2018-2019.

"Diabolical Path (Part III) is the third malignant offering from Corona Barathri as a compilation of his most striking obscure creations covering a period of 2 years of sinister works.

What is particular with this compilation is that it's mostly tracks featuring other strongly devoted and hardworking artists who are well experimented in the fields of dark ritual ambient music.

The horrific splendour begins with children crying and sadistic laughters on "Haegtesblod. The Legacy Of Keziah" featuring female vocals by Chthonia and pursue it's evolution into a dark, hysteric and bewitching atmosphere ending with a very melancholic and ghastly piano ending.
Another interesting facet of this macabre operetta is 2 tracks having a very raw, dark pagan, hypnotic & ancient feeling attached to them and who are dedicated to a specific god or goddess, which in this case is the sumerian goddess Tiamat with "Tiamtu - Aquae Primordiales" and Loki from the Nordic Mythology in "Lokes Kall".
The other very singular track and also the longest one clocking up to 14 minutes is "Agonia". This song is an exclusive version recorded for Ulvdalir and reveal itself to be exactly this, i.e. a more cavernous, meditative and almost ''shamanic'' tone to the overall vibe of the song rather than the usual "demonic" type of atmosphere used to be heard in general in Corona Barathri whole discography.
The other tracks apart from the otherwordly single "Daemonolatreia" released in 2018, are alternated version of "Hymnus Mortuorum" & "Mirror of Diabolus" which are in an esoteric sense, among the very best tracks to be chosen to appear on this compilation because they offer and manifest what Corona Barathri was, is and shall forever be about; Death & The Devil."