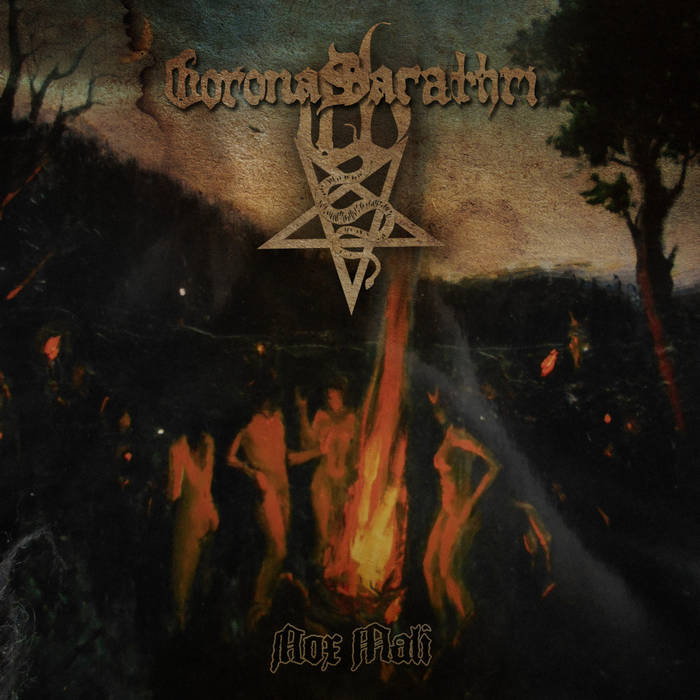 The Noise Beneath The Snow, USA (review):
noisebeneaththesnow.com/2018/07/19/corona-barathri-nox-mali-album-review-ritual-dark-ambient/

"To call what they (Corona Barathri) do unsettling is actually selling them short – there’s something so legitimately dark and foreboding at the heart of their music that it fucks with my head, and not always in a good way. ...it’s utterly enthralling, even if I don’t quite have the nerves to listen to it all that often."
- Clayton Michaels, Indy Metal Vault

"Flame borned by Darkness
reflects in black hearts,
Spirit filled with Evil
is embodied in black souls.
Devil's tribe, Sons of Nahema,
Cursed by light,
Marked with the seal of Hell,
Heirs of the Great Abyss".

A new ritual material written on the eve of the Great Sabbath, dedicated to all the dark souls - Faithful to Diabolus!
Night of Evil, Night of the Nights, Night of the Triumph of Evil Force, Feeding the Fire with our blood.
Samael is the Father of Sins, the Source of Death.
Childs Of Nahema - Sons of Perdition, Dark Warriors, curse to god, curse to the world, curse to mankind.

"Nox Mali" is a sacrificial offering to the darkest & deepest Night of the Year: Samhain.
The Great flaming torch of Sathanas is held up high amidst the falling stars...

On this EP, the spirit of malevolence is evoked with pride, honor & devotion in order to instigate the very gnosis of the Black Flame and the source of True Liberation of the Satanist. This new ritual material was written on the eve of the Great Sabbath MMXVII, and is solely dedicated to all the dark souls - Faithful to Diabolus throughout the Aeons!

Despite being an EP, ''Nox Mali'' clocks almost 1 hour of music with only 4 tracks with none going under 11 minutes, henceforth why it is considerable as a monumental work of Black Magick. Nothing less to expect from Corona Barathri. The album has been produced entirely by Corona Barathri.
The Artwork depicting the Sabbat is still a result of the amazing painting talent of Fosco Culto. The whole album has been designed by Kirill Svart.

The First track called "I. Vocatus Sanguinis Atri" is indeed a call to the darkest blood, a suave invitation to the blessings of the spiritual depths caracterised by clean singed latin prayers and distant bells echoing with deep bass frequencies and monotonous percussions.
The Second track called "II. Nox Mali" is the true representation of diving in the abyss and accepting the gift of Diabolus.
The mantra "Dictum Diaboli" is hypnotizing and lead the adept to embark upon the journey in the underworld with tribal drumbeats, malignant and disturbing soundscapes.
The Third track called "III. Pater Peccatorum" serves as guidance and reverence once the adept stand in front of Diabolus and choose to submit to the Path of the Flames. Demonic growls, Tibetan Bowls & multiple whispered mantras of Satanae characterize the song and prepare the adept for the final stage of the ritual.
The Fourth & Last track called "IV. Patera Gloriae Diaboli (feat. Antelogos)" is the longest track that Corona Barathri has ever done with it's 21 minutes 22 seconds and is probably one of the longest ever heard in a Dark Ritual / Ambient context.
Here we can find all the elements found in the other tracks but with more omnipresent latin prayers and the twist of a somewhat "dark industrial" atmosphere more reminiscent of Michael Ford's style of composition that you can specially hear on the "Summum Malum - Thronos Tou Satana" album released previously this year.

So in the end, with "Nox Mali", Corona Barathri still hold with unadulterated force the Crown of Satanic Sovereignty.
The Black Fire Keeps Burning Bright, Honor Satan with your spilled blood upon his holiest of altars, Honor Him in evil Words and evil Deeds.
Subjugate to the total entropy within One Heart - One Essence!